Joni was a teenager in the 1970s when she had a diving accident that left her paralyzed from the neck down. She became an artist by putting a paint brush or pencil in her mouth. Her book, Joni: An Unforgettable Story, is raw as she shares her story about adjusting to life without mobility. She is angry at God and struggles to process her new reality. I was amazed by her story.

I love that she is open about her inner world. She doesn’t hide that she was mad at God and even wanted to kill herself at one point. But how do you kill yourself if your arms and legs don’t work?

“Why on earth should a person be forced to live out such a dreary existence? How I prayed for some accident or miracle to kill me. The mental and spiritual anguish was as unbearable as the physical torture.” Joni Eareckson Tada. 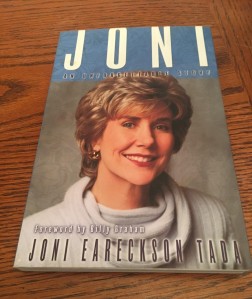 The right book at the right time can be life changing. That’s what her book was for me in the late 1970s. I was living in El Salvador and the country was at war. I didn’t know physical torture, but I knew mental anguish.

For me, war felt like death was mocking me. It teased me, threatening to take away my family, my dreams of growing up, my very life. It felt like darkness. War felt like an electric shock through my body: not enough to kill me, but enough to terrorize me over and over again.

I get lost in books. I imagine that I am the main character. I read her book as a teenager. She broke her neck when she was a teenager. I remember that I stopped reading for a minute and imagined being paralyzed from the neck down. Then I thought about this place of war. What would it be like if I were paralyzed and in this place of violence at the same time? I couldn’t help it; I immediately became grateful. Thank you, God, that my arms and legs work.

Hardships and tribulations, this is what people go through. It’s no different for Christians; it’s part of the deal. There are people all over the world who suffer. Forty years later and Joni is firm in her faith; she’s still honest about her ongoing struggles. I find it comforting to read about someone who faces far greater adversity than I do. It makes me feel like I am not alone. It encourages me. If they can survive worse hardship, then so can I.

I didn’t find strength by pursuing strength. I found it by pursuing peace. In our day of ever escalating turmoil people need a way to find peace. Please spread the word about my book. Book trailer coming soon.